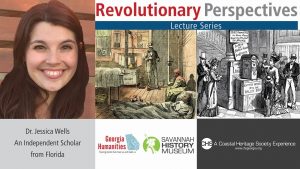 The Revolutionary Perspectives Lecture Series, hosted by the Coastal Heritage Society, focuses on a wide variety of topics unique to the American Revolution era. The lecture series is held annually and includes a diverse set of speakers, including public historians, museum professionals, and scholars.

The final lecture in the series will be presented by Dr. Jessica Wells. Her lecture, “Patriotic Pestilence: The Politics of Identity in American Yellow Fever Narratives,” will explore the antebellum antecedents to the cultural construction of yellow fever. Beginning with the disease’s earliest manifestations in North America, Dr. Wells will discuss the role that yellow fever played in the consolidation of the empire; how yellow fever became known as a “stranger’s disease,” and later as a “southern” disease; and how the cultural construction of yellow fever perpetuated local, regional, and national identities in southern cities like Savannah.  A short reception will precede the lecture.

The Revolutionary Perspectives Lecture Series is supported by a grant from Georgia Humanities.