On March 16, 2017, the White House released a budget outline proposing the elimination of the National Endowment for the Humanities (NEH). The NEH was created as an independent federal agency in 1965 by President Lyndon Johnson through the National Foundation for the Arts and Humanities Act, the most ambitious piece of cultural legislation in American history. Complementing similar agencies, such as the National Science Foundation and the National Aeronautics and Space Administration, the NEH visibly enhanced America’s leadership in the free world in the midst of the Cold War, and helped to cement America’s place in the world of learning and the life of the mind. Democracy, the act said, demands wisdom and vision in its citizens.

Under this charge to nurture democracy, seek wisdom, and inspire vision, Georgia Humanities supports programming that helps us understand ourselves, others, and the responsibilities we have to each other and to our society.

Georgia Humanities partners with the NEH to produce high-quality programs for Georgia’s citizens, and we rely on the NEH for about 46% of our annual budget. 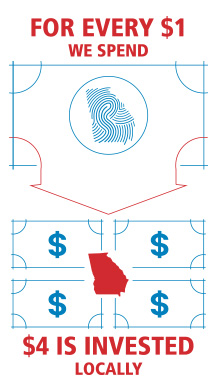