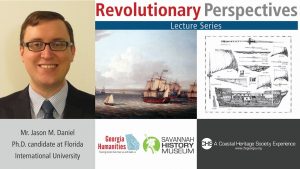 The Revolutionary Perspectives Lecture Series, hosted by the Coastal Heritage Society, focuses on a wide variety of topics unique to the American Revolution era. The lecture series is held annually and includes a diverse set of speakers, including public historians, museum professionals, and scholars.

The second lecture in the series will be presented by Jason M. Daniel, a PhD candidate at Florida International University. His lecture, “Cuban Timber and Atlantic Ships: Spanish Shipbuilding in Havana and the Northern Caribbean, 1713–1763,” will examine the various effects of ship construction in Havana with environmental impact on the island and Spain’s efforts to remain an active participant in the political and economic struggles of the American colonies and the larger Atlantic world.  A short reception will precede the lecture.

The Revolutionary Perspectives Lecture Series is supported by a grant from Georgia Humanities.