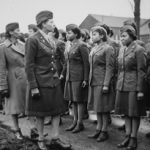 The 6th Cavalry Museum presents a documentary film, The Six Triple Eight, by Lincoln Penny Films, on February 11. The 6888th Central Postal Directory Battalion, known as the Six Triple Eight, was the only all-Black female battalion to serve in Europe during World War II. Confronted with racism and sexism from their own leadership and fellow troops, they served with honor and distinction, completing their mission in six months.

This event is supported in part by a grant from Georgia Humanities.