VIRTUAL EVENT: Unknown No Longer! Giving a voice to those who have been kept silenced

Unknown No Longer! Giving a voice to those who have been kept silenced 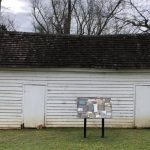 Joseph McGill Jr., founder of the Slave Dwelling Project, will give a lecture at the Robert Toombs Historic House Site in Washington, Georgia, on March 6. The presentation will include an introduction to some of the families who were enslaved at the house of slaveowner and secessionist Robert Toombs, as well as what the enslaved people did after securing their freedom. Discussion of how the research was conducted will also be included, followed by an audience q&a session.

This part of the event will also be streamed live via Facebook.

An exhibition of artifacts found in the one remaining slave dwelling on the property, the “Wash House,” will be presented, along with an explanation of how the archaeological survey was conducted on the dwelling.

Unknown No Longer! is sponsored in part by a grant from Georgia Humanities.

VIRTUAL EVENT—”Small Works Inspired by Poetry”
VIRTUAL EVENT: How Research Can Be a Springboard for the Imagination in Screenwriting