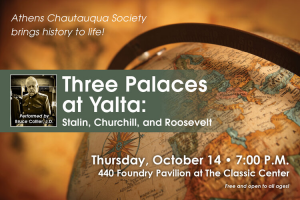 In each of the three acts, Stalin, Churchill, and Roosevelt respectively voice their plans, concerns, and aspirations. Of particular interest to them is the future of Poland, whose invasion by Germany in 1939 ignited the global war, and which has become a symbol of potential conflict in post-war Europe. The three palaces also represent Fear, Honor, and Hope, aspects of the motivations and character of the statesmen who occupy them.

River to Sea: History and Literature, Ecology, and Culture in Southeast Georgia, “The Tragedies of Ebo Landing”: Lecture by Dionne Hoskins-Brown
Common Good Atlanta: Breaking Down the Walls of Mass Incarceration with the Liberal Arts