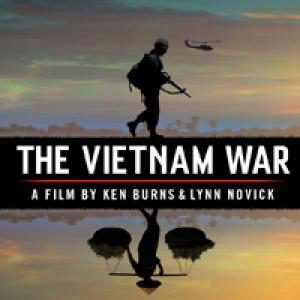 Tune in to Georgia Public Broadcasting for The Vietnam War, a new documentary film by Ken Burns and Lynn Novick. This 10-part, 18-hour documentary series will tell the epic story of one of the most controversial events in American history as it has never before been told on film. Historic resources include rarely seen archival footage from sources around the globe, photographs taken by some of the most celebrated photojournalists of the 20th century, and secret audio recordings from inside the Kennedy, Johnson, and Nixon administrations.

Episode One: “Deja Vu” (1858-1961)
Airs: September 17
Vietnamese revolutionaries led by Ho Chi Minh end nearly a century of French colonial occupation. With the Cold War intensifying, Vietnam is divided into two at Geneva. Communists in the north aim to reunify the country, while America supports Ngo Dinh Diem’s untested regime in the South.

Episode Four: “Resolve” (January 1966-June 1967)
Airs: September 20
As an antiwar effort builds in the United States, hundreds of thousands of soldiers and Marines discover that the war they are being asked to fight in Vietnam is nothing like their fathers’ war.

Episode Five: “This Is What We Do” (July 1967-December 1967)
Airs: September 21
Hanoi lays plans for a massive surprise offensive, and the Johnson administration reassures the American public that victory is in sight.

Episode Six: “Things Fall Apart” (January 1968-July 1968)
Airs: September 24
On the eve of the Tết holiday, North Vietnamese and Viet Cong forces launch a surprise attack on cities and military bases throughout the South, casting grave doubt on President Johnson’s promise that there is “light at the end of the tunnel.”

Episode Seven: “The Veneer of Civilization” (June 1968-May 1969)
Airs: September 25
Public support for the war declines. After police battle with demonstrators in the streets of Chicago, Richard Nixon wins the presidency, promising law and order at home and peace overseas.

Episode Nine: “A Disrespectful Loyalty” (May 1970-March 1973)
Airs: September 27
South Vietnamese forces fighting on their own in Laos suffer a terrible defeat. Massive U.S. airpower makes the difference in halting an unprecedented North Vietnamese offensive. After being re-elected in a landslide, Nixon announces Hanoi has agreed to a peace deal. American prisoners of war will finally come home — to a bitterly divided country.

Episode Ten: “The Weight of Memory” (March 1973 onward)
Airs: September 28
While the Watergate scandal rivets Americans’ attention and forces President Nixon to resign, the Vietnamese continue to savage one another in a brutal civil war. When hundreds of thousands of North Vietnamese troops pour into the South, Saigon descends rapidly into chaos and collapses. For the next 40 years, Americans and Vietnamese from all sides search for healing and reconciliation.