Music and Poetry of Sidney Lanier 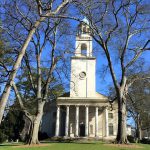 Glenn Memorial Church’s chancel choir will present a one-hour concert featuring the music and poetry of 19th century Georgia poet Sidney Lanier. This is the 175th anniversary year of his birth. One of America’s greatest poets, Lanier is especially beloved in Georgia for his “Song of the Chattahoochee” and “The Marshes of Glynn.” Included in the concert will be Lanier’s “Life and Song,” composed by Steven Darsey in memory of Robert Shaw. Christina Smith, Principal Flute with the ASO, will perform a work for flute composed by Lanier. The culminating work will be Lanier’s “Meditations of Columbia,” a cantata commissioned for the centennial of the United States, set to music by American composer Dudley Buck. The concert is free; everyone is welcome.

This is a community event.