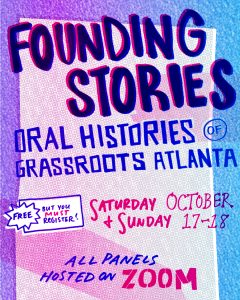 Join Art Papers for Founding Stories: Oral Histories of Grassroots Atlanta, a decade-by-decade series of virtual talks exploring the founding stories of a selection of Atlanta’s DIY and artist-run spaces.

Founders of some of Atlanta’s most beloved and remembered spaces will discuss how these organizations came into existence. What were the conditions that led to the founding of the space, project, or organization? What was happening in Atlanta at that time? What goals were established for creating the space, and were those goals were met? What can the current field of artist-run initiatives learn from this history? Panelists will discuss such questions and more.

Each virtual talk will be moderated by a community member directly involved in the initiatives, and in several cases, who operated or participated in similar concurrent projects. Each conversation in the series is free and open for the public to attend, but registration is required. Participants should note that each conversation throughout the two-day series requires separate registration.

Founding Stories is supported in part by a grant from Georgia Humanities.