One of the only water towers erected in the middle of a federal highway (U.S. 82) stands in Cuthbert, the county seat of Randolph County in southwest Georgia. Just outside of its downtown sits Andrew College, the private Methodist college recognized as the second in the nation to confer degrees to women. Cuthbert’s Historic District boasts architectural styles spanning most of the county’s history, and many of the buildings, originally built around 1890, are still standing on the town square today. 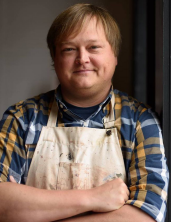 Chris Johnson is a regionally celebrated and recognized visual artist whose public murals have brought renewed interest to an array of Georgia communities. Johnson’s murals blend subjects drawn from local history and celebrate unique and significant contributions that southwest Georgia has made to American culture and history.

Johnson is an assistant professor of visual art, the director of the Visual Arts Program, and the Fine Arts Coordinator at Andrew College, in addition to serving as the arts festival coordinator for the Arts Around the Square Arts Festival, held annually in historic downtown Cuthbert.

Magnolia Alley in Cuthbert features Johnson’s work, and its murals highlight some of Cuthbert’s notable citizens, including Fletcher Henderson and Roosevelt Grier.

Johnson was a recipient of the 2019 Governor’s Awards for the Arts and Humanities, which recognize and honor individuals and organizations that have made outstanding contributions to the civic or cultural vitality of the state.

Visit the Crossroads exhibition to receive the Crossroads catalogue, featuring stories from each of the six host communities. Johnson’s grain bin murals in Shellman grace the catalogue’s cover.

Stories from the Cuthbert Community 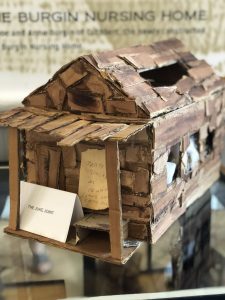 Image of 3-D structure, titled “The Juke Joint,” by Kuanita Murphy, courtesy of the Randolph County Chamber of Commerce.

Rural artists often use the rich history and unique cultural identity of their communities to draw inspiration and support, and commit their community and family histories to memory through their creative works.

Kuanita Murphy, raised in Cuthbert, says she “accidentally” got into art in college and now primarily works in oil-based paints and oil pastels. Through her work, Murphy has turned some of her family stories into art. When Murphy first began her career as an artist, Cuthbert’s Andrew College hosted her first exhibition.

Murphy can still recall the stories told by her great aunt, who often reminisced about the “rolling stores” that used to make their way through town. One of Murphy’s works, an oil painting and 3-D collage of the Pumpkin Town Primitive Baptist Church (where her great-great-grandmother worshiped) is on display at the Welcome Center in Cuthbert, in addition to her other works. 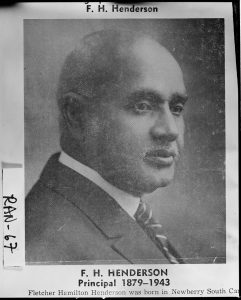 Fletcher Henderson, Sr., was born into slavery in Newberry, South Carolina, in 1857. In the years following Emancipation, Henderson’s mother encouraged his love of learning and by the time he was thirteen, she sent him to live with his father to ensure his future schooling. Henderson graduated from Atlanta University in 1879 and taught for a year in Pike County before he accepted the position of headmaster at the Howard Normal School in Cuthbert, Georgia, one of the earliest schools founded by the American Missionary Association for African American students.

Within his first ten years as headmaster, Henderson nearly doubled the school’s enrollment, and often hosted popular school concerts in the community as fundraisers to cover tuition and school expenses. Henderson served as the school’s headmaster for more than sixty years, and gained national acclaim for his dedicated role in the education of African American students amid the turmoil of the Jim Crow era in Cuthbert.

Henderson Sr.’s son—the performer, arranger, and bandleader Fletcher Henderson—received his education at Howard Normal School, and eventually became one of Cuthbert’s most famous citizens. His band, Fletcher Henderson and His Orchestra, served as the principal model for big band style. The Fletcher Henderson Jazz Festival, held each spring in Cuthbert, celebrates his legacy. 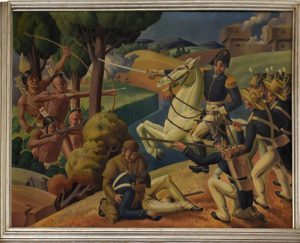 Post offices have connected small towns and their residents to the rest of the world long before phones and the Internet. During the Great Depression, the Works Progress Administration or WPA formed as part of the New Deal to help job-seekers by providing employment through public-works projects. Most post office artwork was commissioned through a separate program funded through the Department of the Treasury, known as the Section of Painting and Sculpture, and later called the Section of Fine Arts.

The Section, often confused with the WPA Federal Art Project, was not created to provide economic relief, but to instead create public art to help boost morale in areas hit hard by the Great Depression. It obtained paintings and sculptures through competitions to decorate new federal buildings, primarily post offices and courthouses. The program began in 1934 and operated until 1943, awarding approximately 1,400 contracts for art in federal buildings.

One such contract was awarded to the post office in Cuthbert. Italian-born artist Carlo Ciampaglia, a renowned muralist, painted Last Indian Troubles in Randolph County—1836, which references the final clashes between the U.S. Army and the Muscogee before the Muscogee’s final removal to Oklahoma. The mural in the Cuthbert post office remains today.

White Oak Pastures, located in Bluffton, is a family farm founded in 1866 and currently owned and operated by Will Harris III. In 1997, Harris III decided to make a change to the farm’s industrialized farming methods. Today, White Oak Pastures is a zero-waste operation and employs more than 120 mostly local staff. 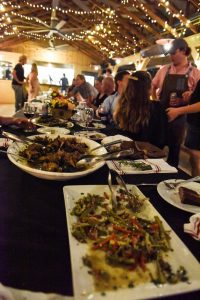 The farm adopted the Serengeti Rotational Model of grazing, expanding from just cattle to include sheep, goats, and poultry. The farm grows a range of vegetables, produces honey on site, and has employed a chemist to examine the possibility of using the animal fat from their own abbatoir for biodiesel as a potential alternative fuel option to power farm operations.

White Oak Pastures opened a restaurant to feed its employees, which is now also open to the public, and visitors are able to tour the entire property, stay on site at the lodge, or attend workshops on various topics that range from canning vegetables to leather shoemaking. 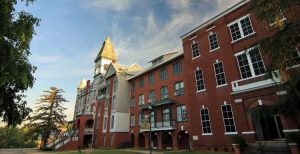 Image of Andrew College in Cuthbert, courtesy of the Randolph County Chamber of Commerce.

Founded on a stagecoach line in the 1830s, Cuthbert was a hub for transportation, but little growth in other areas meant that the local economy was not diversified enough to withstand the movement of transportation routes outside of the community. As often happens with smaller, rural communities, bypasses around the town meant the slow decline of the “town square,” which soon became home to dwindling local businesses and vacant storefronts instead of its previous role as a lively thoroughfare.

Andrew College, established in 1854, sits in the center of Cuthbert, and the college has worked to act as a force for positive change in the hopes of revitalizing the community and breathing new life into its downtown area. The college is leading the way in downtown development by acquiring and restoring six buildings in the center of downtown. Two of these newly renovated buildings house a ceramics studio and the college theatre prop-shop. Cuthbert’s Crossroads exhibit is on display in one of these newly renovated buildings.

In addition to downtown renovations, Andrew College also intends to provide opportunities for local students by expanding their offering of academic programs, such as introducing an online agribusiness program, expanding its nursing program, and developing partnerships to allow the college to offer four-year degrees. Through continued efforts, Andrew College hopes to reestablish Cuthbert as a community full of opportunity for younger generations by providing spaces that sustain the community as a whole.

Randolph County, in southwest Georgia, was created from Lee County by an act of the state legislature on December 20, 1828.

Andrew College, founded in 1854 and located in Cuthbert, was originally named Andrew Female College, and was the second college in the nation to confer graduate degrees upon women. Affiliated today with the United Methodist Church, Andrew College prepares its students to attend four-year institutions.