Monticello was chosen in 1808 to be the seat of government for the newly created Randolph County, which was renamed Jasper County in 1812. The city grew around and from the town square that now forms the intersection of Georgia highways 16, 83, 11, and 212, giving the city the affectionate tagline—all roads lead to Monticello.

Students from Jasper County High School Film interviewed more than one hundred Jasper County residents (ages 14 to 101) about their Jasper County origins, the places special to them, the challenges of rural living, and their views on Monticello’s future. With these interviews, the students produced the documentary Monticello Crossroads to accompany the traveling Crossroads exhibition.

Interviews from the documentary’s production are included in Monticello’s Flipgrid page, where participants chose a prompt to respond to and recorded their responses in a video format.

Stories from the Monticello Community 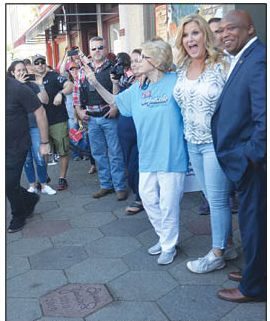 Trisha Yearwood returned to Monticello in 2019 to launch her newest solo album, Every Girl in This Town. Image courtesy of the Monticello News.

Trisha Yearwood is one of country music’s most popular and appealing female vocalists. Yearwood was born in Monticello, Georgia, in 1964, and she grew up on a thirty-acre farm with her parents. Yearwood’s mother, Gwen, was a schoolteacher, and her father, Jack, managed the local bank.

After graduating from high school, Yearwood attended Belmont University in Nashville, Tennessee, and graduated with a bachelor’s degree in music business in 1987. Yearwood began her music career as an intern and as a receptionist at MTM Records in Nashville.

In 1991, Yearwood released her debut solo album Trisha Yearwood, and her first single, “She’s in Love with the Boy,” spent two weeks at the top of the country charts as the first of four hits from that album. It sold two million copies and earned her the Academy of Country Music award for top new female vocalist.

Yearwood has since released more than ten albums, including Jasper County (2005), named for her home county, which included the song “Georgia Rain,” released as the album’s first single. In 2019, Yearwood returned to her hometown to release her first solo record in twelve years, Every Girl in This Town. Monticello presented Yearwood with a named paver on the sidewalk in front of the Monticello-Jasper County Visitor’s Center during her visit.

Yearwood now lives in Oklahoma, but frequently visits her hometown of Monticello with her sister Beth.

Preserving and Celebrating the Land 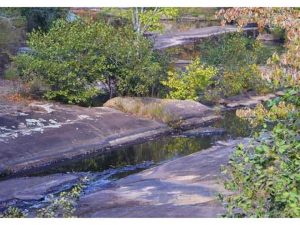 Part of the Oconee National Forest, the only national forest located in Georgia’s Piedmont region, is located in Jasper County. The forest includes the Cedar Creek Wildlife Management Area near Monticello, which is one of the oldest state-managed wildlife areas in Georgia. The area includes nearly 40,000 acres of protected lands that attract hunters each year for the turkey, deer, and small game. Visitors also come to Jasper County to enjoy camping, hiking, or wildlife viewing within the forest and wildlife management area.

To help celebrate its connection to the land and its county designation as the “Deer Capital of Georgia” since 1966, Jasper County hosts its annual Deer Festival in downtown Monticello on the first Saturday in November. Approximately 5,000 people attend the festival each year to see the parade, participate in the venison cook-off, purchase arts and crafts from local vendors, see the live entertainment, and more. The annual Deer Dash offers a 5K Walk/Run and a 1 Mile Fun Walk/Run for participants the morning of the Deer Festival.

Howard Farm continues to be a family operation: Ramon Howard’s uncles farm the land, while his mother and aunts do the canning and make the fried pies. Ramon Howard runs the catering and festival side of the business, and the family continues to hold quail and dove hunts on the property after the fields are dormant for the season.

You can watch interviews with members of the Howard family on Monticello’s Flipgrid page.

Yellow Rose Farm in Jasper County has raised and sold Nigerian Dwarf Dairy Goats in Georgia since 2003. The farm raises and sells goats to be pets, for use by home milkers, and for use as show goats. At any given time, the farm is raising approximately fifty goats, and hosts visitors for Goats 101 classes on the farm. 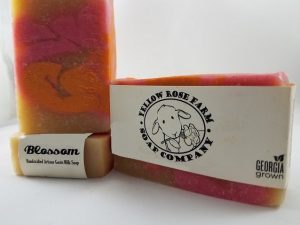 Fueled by a passion for goats and the benefits of goat milk products, Yellow Rose Farm started the Yellow Rose Farm Soap Company, which makes products with the goat milk produced from the farm’s herd. The soap company offers products ranging from handcrafted bar soap, lotion, milk soap, shampoo and conditioner, deodorant, toothpaste, and dog shampoo, among many others.

The Yellow Rose Farm Soap Company is a member of Georgia Grown, and sells its products directly through its website, at local and regional farmer’s markets, and in local shops in Monticello, Social Circle, and Jackson, among others.

The county seat of Jasper County, Monticello, is named after U.S. President Thomas Jefferson’s home in Virginia— the town’s founders were Virginians who had settled the area in 1808.

Professional baseball player Sherrod “Sherry” Smith (1891–1949) was born in Monticello. Smith was a major league pitcher for fourteen years for teams including the Pittsburgh Pirates, the Brooklyn Robins (later Brooklyn Dodgers), and the Cleveland Indians.