The City of Thomaston was incorporated on June 11, 1825, as the county seat of Upson County. Located in west central Georgia, Thomaston has a population of around 9,000 people. The former mill town features an early-twentieth-century courthouse square and historic businesses and homes, in addition to its outdoor recreation opportunities like Sprewell Bluff Park.

Stories from the Thomaston Community 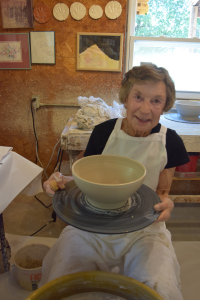 Rural artists often commit community and family history to memory through art. Sandra Miller still carries on a pottery tradition of more than 150 years in the Jug Town community of Upson County. She describes folk pottery as distinct because potters gather the clay themselves, make their own glazes, and generally create utilitarian pieces.

Several generations of families produced earthenware pottery, from butter churns, to pitchers, to storage vessels, and storage vessels, bowls, and jugs for water and spirits. Pottery was one of the leading industries in the county for years, Miller recalls, “folk potters generally came out of families who had been in the business for several generations.” In Thomaston, Sandra Miller’s pottery is sold in nearby businesses, including the local pharmacy and Rescue Me Market & Mercantile. 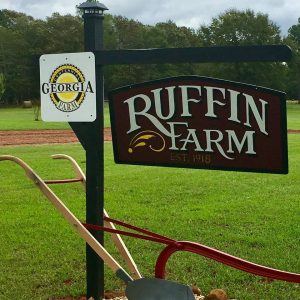 The Ruffin Family Farm in Thomaston has been in the Ruffin family for more than 150 years and spans over 100 acres. It was recently awarded the title of Centennial Farm. The Centennial Farm program, established in 1993, honors rural farming traditions and the longevity of certain farms, as well as acknowledges the importance of this industry to the economic welfare of the community and state. Since its founding, the program has recognized more than 530 Georgia farms.

John Ruffin applied for the recognition, recalling that the farm originally grew cotton as its “cash crop” when the family worked the land with mules and horses. Anything else grown then was used to feed the family and livestock. During prohibition, one of the sharecroppers on the property helped build a copper still and used the syrup the Ruffins already made on the property to make whiskey, which helped sustain the farm through the Great Depression.

The Ruffin Farm stopped growing cotton in the 1960s, and leased the land to a local dairy farm. Today, the land raises beef cattle and grows hay. The Ruffins all have other profession, so the farm is what some would call a “hobby farm,” but John Ruffin maintains it will “carry on the tradition and preserve the history for family and future generations.” 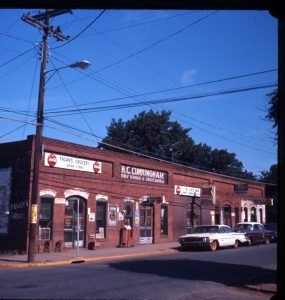 The “block” on Bethel Street was the center of the African American community in Thomaston. Image courtesy of Thomaston-Upson Archives.

After the Civil War, Georgians passed state and local legislation, known as “Jim Crow” laws, which legalized segregation. It was often up to individuals or groups to work around the existing system to find opportunities as they could.

In the South, segregation forced African Americans into neighborhoods separate from whites, limiting their access to goods, services, and opportunities. These African American communities flourished, and included an array of African American owned stores, schools, churches, and civic organizations.

Over the years, Thomaston’s African American community has continued to flourish. Elijah Green built his general store in 1908, which still stands today on North Bethel Street. Green’s store was a popular gathering place into the 1950s, where families bought groceries and children bought snacks after a day of playing outside. Green was well loved by the local community and was known to pour his wealth back into charities and projects that benefited the community.

The Hill Cunningham Building—widely known as “The Block”—was a long brick building with a popular barbershop, soul food restaurant, dry cleaner, snack bar, and pool hall. Though the businesses are now closed, The Block still stands along Bethel and Daniels Streets.

The Emancipation Proclamation Celebration is a yearly event celebrating the emancipation of Upson County’s slaves, held annually since 1866, making it the oldest such celebration to continue uninterrupted in the United States. The celebration includes a parade through downtown, speeches, singing, and other festivities held in Lincoln Park in Thomaston.

Thomaston’s economy was primarily based on the manufacture of textiles and tire cord during the twentieth century.

Evelyn Hanna,born in Thomaston, was one of a number of southern women whose writing became known as one of Georgia’s new “money crops.”

The majority of the settlers to Upson County came from the eastern counties of Georgia, between the Oconee River and Augusta.