To inspire your research, check out sample Georgia topics paired with links to primary sources and contextual information. Click each image to view it in more detail. 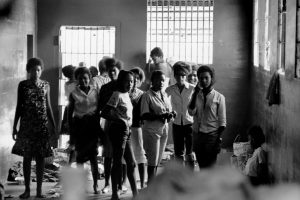 Following the Albany Movement, the Americus Movement continued working to increase voter registration in Black communities and to educate people in Americus about civil rights and citizenship. Several waves of protesters were arrested, including a group of thirty teenage girls. They were imprisoned in terrible conditions that were eventually publicized and resulted in their release. The Americus Movement opened doors for African Americans in Americus and put public pressure on the city to desegregate.

Continue reading about the Americus Movement in the New Georgia Encyclopedia. 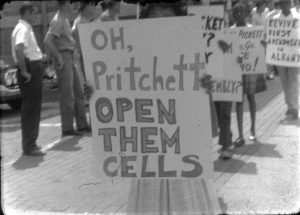 The Albany Movement was the first of the civil rights era to attempt to desegregate a whole community. More than a thousand Black protesters were jailed over the course of the movement, including Martin Luther King Jr. After months of work and little progress, King considered the movement a failure. However, King learned from the Albany Movement and applied the lessons to his work in Birmingham, Alabama.

Continue reading about the Albany Movement in the New Georgia Encyclopedia. 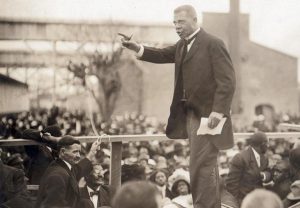 In the fall of 1895, African American scholar Booker T. Washington delivered a speech at the Cotton States and International Exposition in Atlanta. Fearing backlash from his white audience, Washington argued that the key to improving race relations in the South was access to education and job training for African Americans. Prominent Black scholar W.E.B. Du Bois criticized Washington’s speech for promoting harmful stereotypes of African Americans. The address and the conversations started by the two men’s differing approaches acted as early stepping stones for the coming civil rights movement. 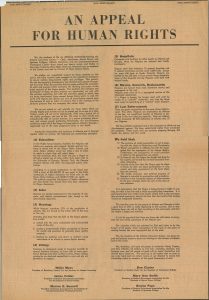 Students from Atlanta’s historically Black colleges formed the Committee on Appeal for Human Rights (COAHR) in March 1960. Their manifesto, “An Appeal for Human Rights,” was published in local newspapers, including the Atlanta Constitution, garnering attention and praise for their commitment to nonviolence. The students then lobbied to desegregate lunch counters and eventually joined forces with the Student Nonviolent Coordinating Committee (SNCC). Through a campaign of sit-ins and boycotts at restaurants and stores, COAHR worked to desegregate prominent local businesses.

Continue reading about the Atlanta Sit-ins in the New Georgia Encyclopedia. 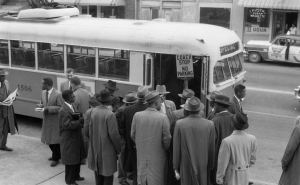 After the success of the Montgomery bus boycott, a group of Black ministers in Atlanta came together and launched the Love, Law, and Liberation (Triple L) Movement to desegregate Atlanta’s city buses. In January 1957, six ministers, led by the Reverend William Holmes Borders, boarded and sat in the front of a bus. This action resulted in their arrest, allowing the ministers to challenge and ultimately defeat bus segregation in court.

Continue reading about bus desegregation in Atlanta in the New Georgia Encyclopedia. 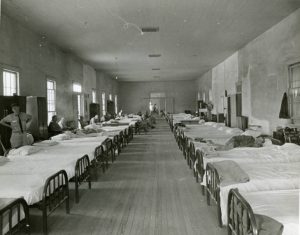 Eugenics, the theory that humanity can be improved by controlling reproduction and genetics, was a fashionable subject with devastating consequences in the twentieth century. Eugenics entered mainstream conversation in Georgia after a presentation at the Georgia State Sanitarium in 1912. During the presentation, Dr. G.I. Garrard argued that criminals and the mentally disabled should be surgically sterilized, removing their ability to produce children. Between 1937 and 1970, sterilization was a legal practice in Georgia hospitals and prisons, forever altering the lives of thousands of individuals.

Continue reading about Eugenics in Georgia in the New Georgia Encyclopedia. 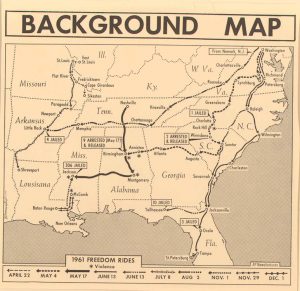 In the spring and summer of 1961, the Congress of Racial Equality (CORE) sponsored a series of integrated bus and train rides across the South to challenge the segregation of public stations and terminals. The Freedom Riders carefully planned their route and tactics to ride safely but still faced harsh resistance at many stops. Though they traveled undisturbed through Georgia, tensions came to a head in Alabama, where the Freedom Riders experienced widespread violence.

Continue reading about the Freedom Rides in the New Georgia Encyclopedia. 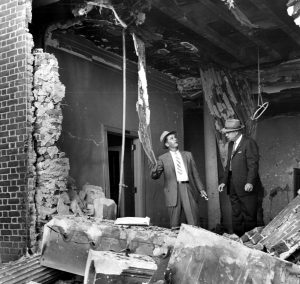 After the U.S. Supreme Court case Brown v. Board of Education (1954), which ruled racial segregation in public schools was unconstitutional, southern lawmakers began to organize against court-ordered desegregation. As a response, eighty members of the Atlanta Christian Council issued a manifesto calling for the peaceful integration of schools. After the Temple bombing in Atlanta, more than 300 members of the council issued a second manifesto to organize citizens and hold meetings on integration throughout the state.

Continue reading about the Ministers’ Manifesto in the New Georgia Encyclopedia. 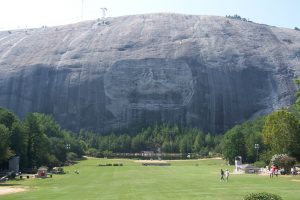 As the world’s largest mass of exposed granite, Stone Mountain is a natural wonder. The rock’s face is also home to the nation’s largest Confederate monument. Conceived by the United Daughters of the Confederacy in 1914 and designed by famed Mount Rushmore artist Gutzon Borglum, the carving is the centerpiece of the surrounding park and tourist attraction. Between the Confederate memorial and its connection to the Ku Klux Klan (KKK), the park has become a hotspot for controversy in recent years.

Continue reading about Stone Mountain in the New Georgia Encyclopedia. 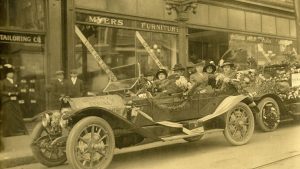 In 1920 the Nineteenth Amendment was added to the U.S. Constitution, stating that the right to vote, or suffrage, could not be denied based on gender. Groups such as the National American Woman Suffrage Association (NAWSA) and the National Association of Colored Women (NACW) worked tirelessly in the late nineteenth and early twentieth centuries to secure voting rights. While the opposition from many in the South slowed their progress, Georgian women gained voting rights in 1922, two years after the constitutional amendment.

Continue reading about Woman Suffrage in the New Georgia Encyclopedia.

Back to the main topics page
History and Advocacy2020-08-262021-07-23http://s215221.gridserver.com/wp-content/uploads/2016/11/logo.pngGeorgia Humanitieshttp://s215221.gridserver.com/wp-content/uploads/2016/11/logo.png200px200px
STAY CONNECTED
Sign up for our newsletter to get updates and information on the best things happening in Georgia!
GEORGIA HUMANITIES